The Cloud Dragon on the ceiling of Tenryu-ji's Hatto was painted in 1997 by the renowned nihonga artist Kayama Matazo (1927-2004), as one of the projects commemorating the 650th anniversary of the death of Tenryu-ji's founder, Muso Kokushi.

The first step in the project was to cover the Hatto's 12.6 x 10.6-meter ceiling with 159 cypress planks, each 3 centimeters thick. These were lacquered, after which a layer of kaolin plaster was applied in a circle nine meters wide. This served as a base for the painting. The Cloud Dragon is rendered in the happo nirami style, in which the dragon appears to be looking directly at the viewer from wherever it is seen in the Hatto.

The present Cloud Dragon replaces an earlier one painted by the Japanese artist Suzuki Shonen at the time the Hatto was moved to its present location in the early Meiji period. By the 1990s this painting had deteriorated to the point that it could not be restored, so the new one was commissioned. A portion of Suzuki's dragon has been preserved, however, and is publicly displayed in the Daihojo every February. 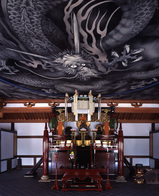 When to See the Cloud Dragon