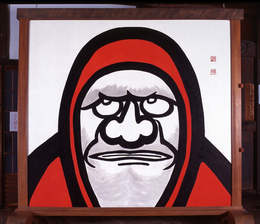 Tenryu-ji is located in Arashiyama, a scenic area at the foot of the mountains on the western outskirts of Kyoto.

To the south of the temple the Katsura River emerges from the rugged Hozu Gorge and is spanned by picturesque Togetsu-kyo (Rising Moon Bridge). On the hills just west of the temple one finds Kameyama Park. In times past all of these places were located on Tenryu-ji's precincts.
The Arashiyama area's historical connections with Zen are deep. In the ninth century Empress Tachibana no Kachiko (786-850) founded the temple Danrin-ji, Japan's first Zen temple, on the present site of Tenryu-ji. After the temple fell into disrepair the site was used by the emperors Go-Saga (1220-1272) and Kameyama (1249-1305) as a detached palace. Emperor Go-Daigo (1288-1339) also resided here.

Tenryu-ji was established in 1339 by the shogun Ashikaga Takauji (1305-1358) in memory of Emperor Go-Daigo (1288-1339), with the eminent Zen master Muso Soseki (1275-1351) appointed as founding abbot. Landed estates were donated to the new temple to help fund its construction, but as the resulting revenues proved insufficient Muso Soseki and Ashikaga Tadayoshi devised a plan to send two trading ships to China and use the resulting profits to complete Tenryu-ji's construction. This plan was a great success, and the temple was officially consecrated in 1345. It was designated first among Kyoto's Five Mountains (the city's five major Zen temples), a ranking it maintains to the present day.

Since its founding Tenryu-ji has been ravaged by eight major fires, in 1358, 1367, 1373, 1380, 1447, 1468, 1815, and 1864. Of the early fires those of 1445 and 1468 were particularly severe, and it was not until the shogun Toyotomi Hideyoshi (1536?-1598) provided financial support in 1585 that the temple was able to rebuild. Tenryu-ji had another major conflagration of 1815 and suffered further damage in the great fire of 1864, the result of the fighting that preceded the end of the feudal period in 1868. Then, in 1877, as Tenryu-ji was still in the process of rebuilding, most of the four square kilometers of arable land owned by the temple in the Sagano district was confiscated by the Meiji government. This left Tenryu-ji with less than a tenth of the property it had previously owned.

Despite these setbacks, Tenryu-ji continued its rebuilding efforts through the late nineteenth century. The Zendo (Zen meditation hall), the only building to survive the 1864 fire, was moved during the late nineteenth century to serve as a replacement for the Hatto (lecture hall) and Butsuden (Buddha hall), and in 1900 the new Hojo (main hall) and Kuri (living quarters) were completed. Reconstruction of the Kohojo (reception hall) was finished in 1924. This was followed in 1934 by the consecration of a new Tahoden (shrine honoring Emperor Go-Daigo) and the construction of the Shoun-kaku and Kan'u-tei teahouses. This brought Tenryu-ji to a form close to what we see today.